React is a library that can serve you as the V or "The view" in your MVC app, or as the whole MVC, this depends on how the program is structured.

In this tutorial, we'll use React as the whole MVC.

There was a time where the Es6 syntax (for javascript) didn't exist, or was not accepted. Nowadays everyone can use Es6 natively in NodeJS, or compiled using starters that use either babel or whatever. The same applies for JSX syntax, which will be used here.

It is called JSX, and it is a syntax extension to JavaScript. We recommend using it with React to describe what the UI should look like. JSX may remind you of a template language, but it comes with the full power of JavaScript. React docs

In this tutorial I'll assume that you have NPM and NodeJS installed and updated, if not, check the NodeJS page and install or update them.

Open a console somewhere and type npx create-react-app tic-tac-toe, this will create a pre-configured react app.

You don’t need to install or configure tools like Webpack or Babel. They are preconfigured and hidden so that you can focus on the code. React's create app 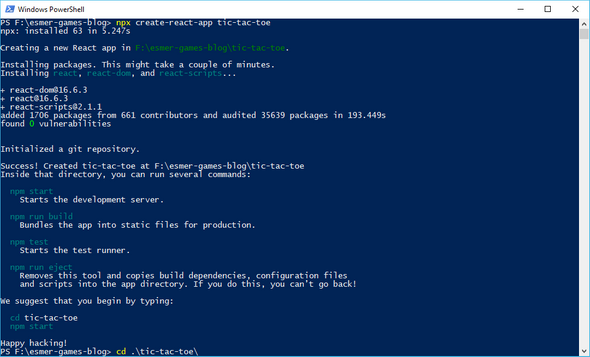 Once it finishes, you'll have to navigate to the folder of the project, use cd tic-tac-toe and you're in. You can test the project with npm start then.

In react, as mentioned earlier, we'll use a special flavor of javascript Es6. This is called JSX, and is has a difference with normal javascript: It supports JSX expressions.

A JSX expression is a simple language construct that let's us shorten the creation of react elements. Then, instead of calling functions like:

You just type the element as if it were HTML:

Easy huh? Note that even that I'm not calling React.createElement explicitly, I need to import React from 'react', that's because internally the JSX expression will be converted into the function call.

Lower case elements describe native HTML components such as div, p, i, span... And for those that start with upper case, they describe React components. The latter can be achieved using either functions or classes, a quick example:

Back in to the project now. create-react-app (AKA "CRA") will create this folder structure: 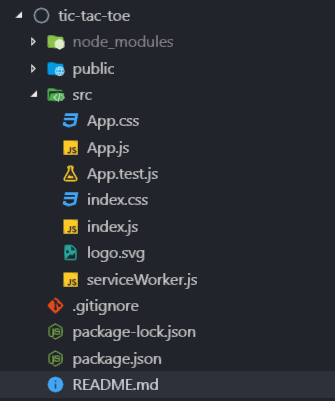 Note that from now on, I'll rename .js files that contain JSX into .jsx extension. Let's first focus on App.js to understand the key aspects of this starter:

Those are the main imports that the app needs to run. First, we've imported React, as mentioned earlier. logo and App.css are here to make the app look more beautiful. Component is necessary because we're using a stateful component, we could also omit this import and write:

Or even replace it with a stateless component, as this starter does not handle state at all:

The key here is to understand that, at the end you have to imagine as if React translates the above code, into real DOM nodes (Or "HTML tags" if is easier to understand) that are loaded here (I'll omit lots of tags to make the example shorter):

Then, your web browser will have loaded in memory something like this:

So, what you're waiting for? Go ahead and tweak your code a little and see how the page changes! I recommend you to start tweaking App.js's code at first.

Just type npm start (At the root of the project) and you will see: 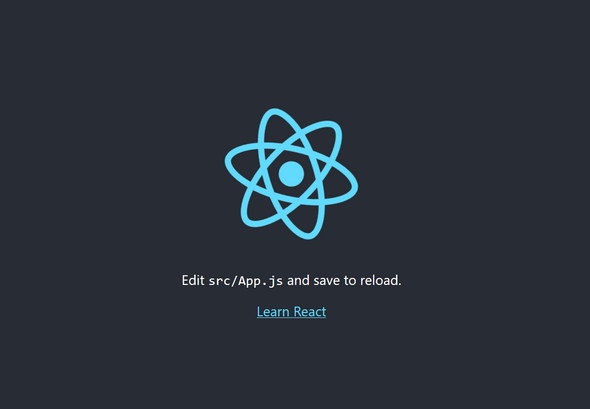 So here ends this part of the tutorial. I'll leave you understanding the very basics of react, when you're used to it, move to the next chapter!

Comments? Thoughts? If is there something that is not clear, or needs further explanation (Or even a better one 😅) let me know in the comments or contact me! See you the next week!